Our karate lessons are based on the style of Wado Ryu, which is a traditional Japanese martial art, founded by Sensei Hironori Ohtsuka.
The Japanese letter kara means empty, and te means hand, therefore it is commonly translated into empty hand, a combat art without using any weapons.
Young Gloves Karate was established in 1999 by Sensei Justin Thomas specialising in teaching karate to children from five upwards and adults.
The club quickly developed from one small club and has now expanded to many locations in the area of Worcestershire and The West Midlands. 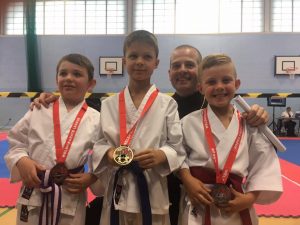 Young Gloves specialise in teaching traditional karate classes to children in separate classes (We do not believe in mixing children with adults).
Both male and females from 16 years are welcome to train in venues specially for adults.

Young Gloves Karate Schools will always strive to offer a safe friendly environment to train in, offering the best coaching skills to its students. In return the student will be expected to conduct themselves in a courteous manner, respecting the training area, Sensei, fellow students and parents of students at all times.

Rowdiness, a bad attitude and over zealous fighting will not be tolerated, all students will be taught to control themselves and to always think of how their actions can effect others during all of our self defence classes, martial arts classes and karate lessons.

Bullying both verbal and physical will be dealt with severely, and will result in loss of membership. On completion of the fourth week of training, if the student is suitable they will have the opportunity to become a full member of Young Gloves Karate schools.

A licence form will be issued to each new student, after becoming a full member which will affiliate the student to the FIST, (Federation of Independent Styles Training) which in turn is affiliated to the WKA (World Karate Association). 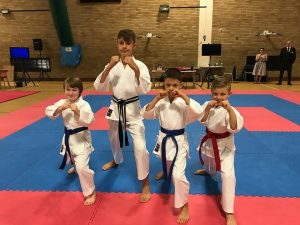 Students will be given the opportunity to take part in selected tournaments both locally, nationally and internationally through the squad training programme, but will never be put under pressure to do so.

There are no false promises given with Young Gloves Karate, you will become a competent karateka if you train regularly and attend our martial arts classes and self defence classes, students will learn to be more assertive and will receive high quality tuition to reach their martial art potential. 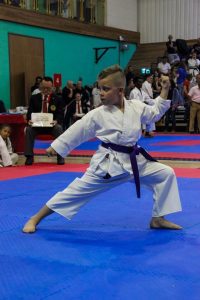 Students are expected to practice in their own time to pass their gradings and will only move forwards in their karate by working hard in the Karate classes, attending courses, listening to the Sensei and following their advise.

All students have to train for a minimum of five years to be eligible for a black belt 1st Dan grading. Students who are 18 and above who, continue to train twice weekly and attend courses will be entered for their 2nd Dan grading. 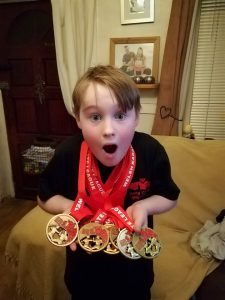 Parents are welcome and encouraged to watch the Karate classes at any time apart from gradings.

Young Gloves cater for all abilities of student, many children who lack confidence, or who are bullied or have learning difficulties attend classes on a regular basis and train alongside their friends and grow in confidence gradually through the training and grading process.

Since 1999 Young Gloves have produced many students who have passed their Black belt 1st Dan,
Many students receiving awards for both fighting and Kata in national and local competitions as well as European Champions. 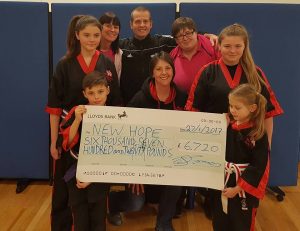 A very big part of the club is raising money for our local community.  This really stands Young Gloves apart from others.  Encouraging children from the club to actively take apart in various charity events such as inter-club competitions, discos, bbq’s World Record attempts and other sporting feats we have now raised over £63,000 for Children Charities in our area.

Parents who are interested in their children taking part in karate classes, self defence classes and martial arts classes can come along to any of the beginners classes advertised and they will receive a very warm welcome. 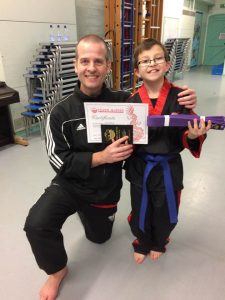 Head karate Instructor and founder Justin Thomas quotes” There is nothing more gratifying in the world than to see someone who had walked into your dojo several weeks before who didn’t smile, talk or interact with anyone else, start to come out of their shell and become more confident in their abilities.”

Many teachers comment that they always know Young Gloves students as they are confident, well mannered, focused children who are keen to learn and develop both physically and mentally to for-fill their potential and make a difference to the people around them.