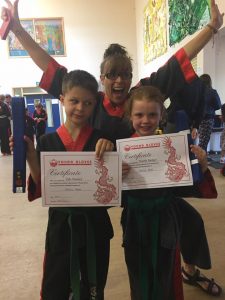 What Happens at a grading
If the student is successful in passing their grading they will be awarded their belts the following lesson, the licence and certificate will be returned up to two weeks later.

Licences
Licences must be valid, and presented on the day of the grading, filled in correctly with the students name, address and the parents signature, a photo of the child must also be included. No licence means the student will be unable to grade or train at any of the classes.

Failing a Grading
If a student fails a grading the student will be re-entered for the next grading 12 weeks later at no extra cost. This does not apply to Black Belt gradings the student will have to pay the full amount again. Students are expected to learn the techniques that are needed for the grading they are taking. children are not graded on Katas until they take their 4th Kyu Advanced (Purple & White)

Marking System
Students are marked out of 10 for each section of their grading which may consist of the following, depending on the grade they are taking.
Basics, Combinations, Kicks, Punches, Blocks, Japanese, Pad work, Sparring and Katas.
Students must achieve a mark of 5 or above for each section to pass their grading, an overall mark of 7 would achieve a merit, 8 or over a distinction.
The licence will be stamped at their appropriate grade and the student will receive a Pass, Merit or Distinction award alongside certificate and belt. 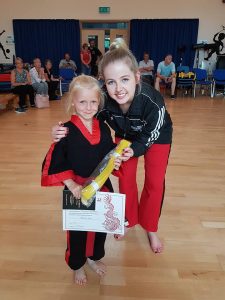 Grading Weeks
Grading are held in March, June, and November. The weeks in between may vary because of school holidays. 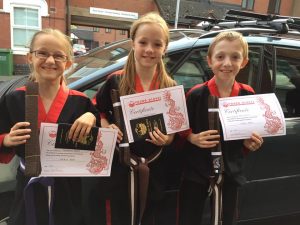 Special Needs
Children who have special needs will receive the support and guidance that they need for gradings from the examiner and the club instructor. Please make sure that the examiner is informed of a students special needs before the grading takes place. 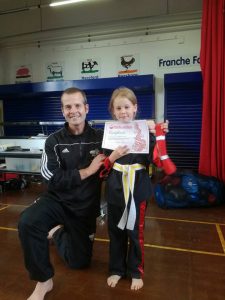 Is my child ready for the grading ?
This question is frequently asked to instructors, if the club instructor feels that the student has a good chance of passing the grading then the student will be entered.
The instructors must be trusted to make the right decision on this matter, it is then up to the student to make sure that they practice in their own time.
Students are advised to attend regular appropriate classes, pre-grade course, and revise their syllabus to ensure successful gradings.
students and parents can ask their club instructor if they are not sure about anything at any time and they will be very glad to help.