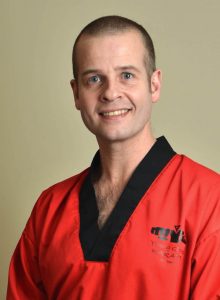 Details:
Establishing Young Gloves Karate in 1999 and over 30 years experience in martial arts.
With a background in various styles including Judo, kickboxing, traditional karate and Bojutsu.
Justin started off at the famous Karate Temple in Birmingham under Toru Takimizawa and went to train under Eugene Codrington 7th Dan .
Sensei Sid Gordan 6th Dan now instructs Justin on a one to one basis correct technique and Wado of the highest standard.
Many National Competition Competition Awards in both Kata & Kumite.

Justin also is a keen cyclist and runner and has entered many charity events raising money for various causes and has up to date helped to raise over £63,000 for local children charities.

Justin is married to Jane Thomas, and has one child, Samantha Thomas who is currently a black belt 3rd Dan and Instructor for the club.

Other Interests include playing the Guitar. 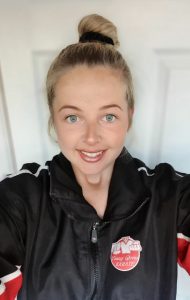 Details:
Samantha Thomas is the daughter of Sensei Justin Thomas, head of Young Gloves Karate.
2015 Bronze Medal English KWON Championships.
WKU English Squad Member & Women’s Captain Competing Internationally in Europe.
2016 Bronze Medal Kata KWON WKU
2016 Silver WKU European Karate Championships In Germany
She has trained at Traditional Karate since the age of 4 years old. Samantha achieved her 1st Dan Black belt in November 2007 in front of the BKA in Manchester. She has also recently gained her 3rd Dan Black belt in November 2018.
She has entered a number of competitions both locally and nationally and internationally, taking 1st place in both sparring and kata in many of them.
As well as training, Samantha also assists sensei Justin Thomas in coaching and now has her own karate class on Mondays and Saturdays

Joint honors in English and Physical Education at University of Worcestershire, Samantha is now a fully qualified teacher specialising Sports/Education and English.
As well as her passion for karate Sam also has other hobbies and interests.
She has been playing the piano since the age of 8 and is currently grade 8 in music.
Sam is also very keen in all sport and is a regular member of the gym and boxercise sessions. 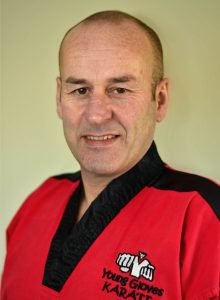 Details:
Gerard Thomas 3rd Dan Black belt, starting Wado Ryu along side his brother Sensei Justin Thomas in the early 90’s. He has entered tournaments on both local and national levels.
Took both 1st Dan Black Belt and 2nd Dan at the same time as Justin.
Teaching in Stourbridge classes since 2006, training many students beyond black belt level, as well as having students enjoy success in competitions locally and nationally.
Favourite Technique is Spinning Back Kick, favourite kata, Passai.

In the day Gerard works for himself as a TV engineer and aerial installer in Stourbridge.

Other interests include Golf, cycling, and playing guitar. 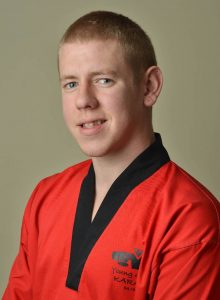 Member of the Bojitsu Group
Competed in several competitions, focusing on Kata’s
Participate in all club activities in order to raise money for local charities.
Having difficulties including dyslexia, dyspraxia, speech problems and epilepsy has never been a barrier and Matthew is a fine example of what can be achieved within the club.

Mat always wants to help anyone, and is especially keen to teach to get involved helping with any learning difficulties and disabilities
“Joining Young Gloves has helped improved my confidence. It has shown me that no matter who you are, where you are from or what set backs you might have, anything is possible if you just put your mind to it.”
Matthew also enjoys playing football for Kidderminster Athletic Warriors.
Favourite Kata:- Kushanku, Jion
Favourite Techniques: Nidan Geri  and Haito 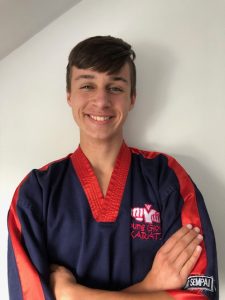 A member of Young Gloves Karate for the last 10 years, achieving his junior black belt in 2017 at the age of 12.
A member of Bo Jutsu group achieving Chevron Level 1 in 2019.
Luke has competed in local, interclub, national and international competitions in Kata and Kumite since a young age and achieved some excellent results. Also taking the role as Captain of the competition squad. 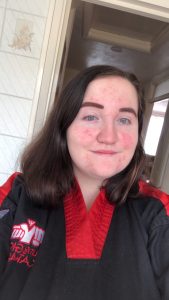 Member of young gloves karate since 2009. She achieved her 1st Dan Black Belt in 2016 and is planning to take her 2nd Dan this year.
She is apart of the Bojitsu group and passed the first level grade in 2019.

She has helped with instructing the younger students and lower grades for many years and enjoys helping people improve and develop new skills.
Hollie has just completed and achieved her Level 3 Diploma for Early Years and Education, this has allowed Hollie to develop skills to support teaching children who may need additional support in learning karate and she is DBS checked.
Hollie has taken part in many of the clubs annual charity competitions taking part in kata and kumite and placing 3rd and 4th throughout the years.
Hollie has also taken part and enjoyed the many charity events that take place throughout the years to support local charities.
Favourite Kata:- Passai and Jion
Favourite Technique:- Surikomi Mawashigeri 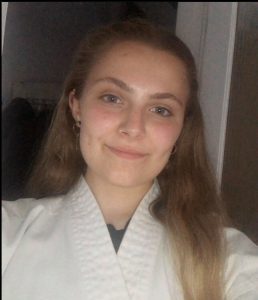 Joined Young Gloves Karate in 2010 Having competed at many regional and national competitions representing Young Gloves in both kata and kumite, she was selected to compete internationally in Germany representing England after becoming British Champion in kumite for her age group.
She has also competed at many of the competition events hosted by the club. Her favourite thing about Karate is the ability to always learn new things and develop technique.
Kayleigh is currently going into her final year of University studying Physiotherapy at the University of Liverpool. She hopes to become a Paediatric Respiratory Physiotherapist.
Looking to do her 2nd Dan after she graduates.
Outside of karate, Kayleigh enjoys Powerlifting, CrossFit, and football having played for clubs such as West Bromwich Albion and Coventry city.
Favourite Kata:- Ku Shan Ku
Favourite Technique:- Gyakuzuki 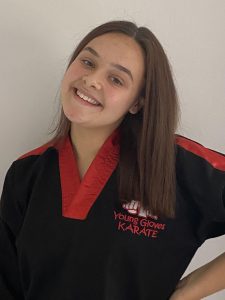 Member of Young Gloves Karate since 2012
Holly assists teaching and loves to help lower grades improve in any way she can. She aspires to be an instructor in the future.
Holly has attended many Young Gloves charity events and loves helping the club raise money for amazing local charities. She even chopped her hair off to support one of the annual charity choices.
Outside of karate Holly also enjoys Girls Brigade.
Holly likes to play the bell lyre with her Brigade band and taking part in parades on special occasions.
Holly has also completed her bronze and silver Duke of Edinburgh award and hopes to finish her gold in 2021.
Holly also works for a tutoring company where she marks work and tutors younger students in Maths and English.
Also enjoys shopping and constantly talking/meeting friends.
Favourite kata: Chinto
Favourite technique: Mikazukigeri