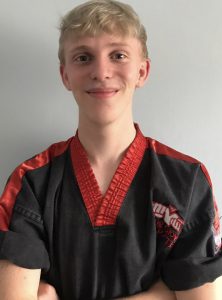 Member of Young Gloves Karate for 11 years.
Member of the Bojitsu group successfully passing
the first level grading in November 2019.
Yoel has competed in kumite and kata categories in local, national and inter-club competitions and has been assisting in the scoring in the inter-club competitions.
Yoel has played an active role in numerous Young Gloves charity events and promotional events raising money for various local charities.
Outside of Young Gloves Yoel also enjoys a range of outdoor activities including mountain biking, diving and fishing.
Yoel is also an active member of the Young Firefighters Association and is looking forward to a career in the Fire and Rescue Service following completion of his uniformed public services course.
Favourite Kata: Kushanku Passai 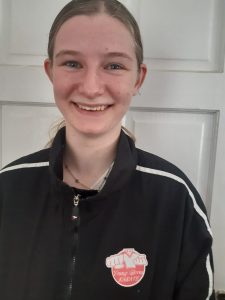 Shannon has been a member of Young Gloves since 2011; she achieved her junior black belt in 2019 with a double distinction.
Shannon has since started to train in Bojitsu and is working towards her 1st chevron.
Shannon has competed in 3 national competitions, whilst regularly competing in the clubs charity competitions.
Shannon strives to improve her own karate while helping younger members of the club she is known in the club for her flexibility and her jodan kicks
Outside of karate Shannon enjoys practicing the connections play with school and learning how to play the guitar.
Shannon hopes to train as Pediatric nurse
Favourite Kata:-  Passai
Favourite Technique:- Mawashigeri 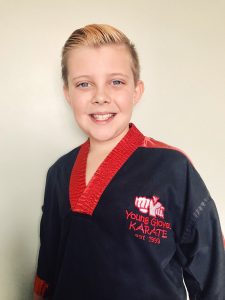 Member of Young Gloves Karate for 5 years
Euan has competed in kumite and kata categories in local, national and interclub competitions.
Silver and Bronze medals in Welsh League Championships

Silver in Kata at Unity World Championships.
Outside of Young Gloves Karate Euan enjoys playing football for Kidderminster Athletics Kestrels and going out meeting his friends at the park.
“Becoming part of the young gloves family is one of the best things I’ve ever done.
I have made a lot of friends that will last forever.”
Favourite Kata:- Pinan Shodan 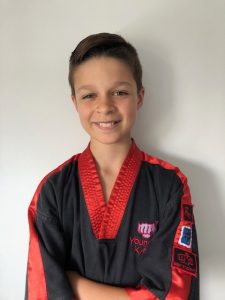 A member of Young Gloves karate since 2015 developing to achieve the high rank for 1st Kyu.
Daniel trains very regularly with the club and is a very active member of the YGK Squad.
Entering many competitions on both local and National level, concentrating very much on Kumite where his real passion lies.
Along with karate Daniel also enjoys football and gaming.
Favourite Technique:- Tobokomozuki 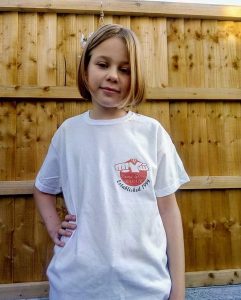 Hannah Loach
3rd kyu – Brown Belt
Wado Ryu Karate
YGK Team Leader
Joined Young Gloves Karate in September 2016.
Hannah has achieved 5 best student achievements and she has competed in kata and kumite at inter house, local and national competitions. Finishing 2nd in kumite and 3rd in kata most recently.
Hannah enjoys attending the beginners classes to help mentor less experienced students.
“Joining Young Gloves has given me so much confidence. I have made life long friendships through karate. I love training with Sensei Sam and Sensei Justin, they are really amazing teachers.”
Outside of karate Hannah enjoys keeping fit by running, creating art work and reading.
Favourite kata:- Pinan sandan 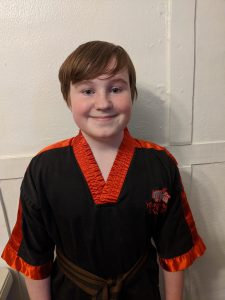 Ethan Darby
1st Kyu (Brown and Black)
Wado Ryu Karate
YGK Team Leader
A member of Young Gloves Karate since 2015 which Ethan thoroughly enjoys being part of. Ethan has competed in Interclub, local, National and International Competitions in kata and kumite with achievements including;
2016 – KWON WKU Midlands Open, Bronze in under 10 Kumite.
2017-2018 – Welsh Karate League in kata and kumite overall gaining 1 Gold, 1 Silver, 5 Bronze.
2018 – Unity World Games, Bronze Kumite.
Ethan trains regularly at different venues with different Sensei’s on a weekly basis and has also played an active role in the many Young Gloves charity events.
Ethan is looking forward to learning Bojitsu with the club in the future.
Favourite Kata :- Pinan Shodan and Kushanku

Niamh Badger
1st Kyu (Brown and Black)
Wado Ryu Karate
YGK Team LeaderA member of young gloves since 2015.
In her very early days she was extremely shy and lacked confidence. Within months of starting she discovered a new found love!!
Niamh has taken part in a number of competitions at club level, local and international.
Kata being her passion.
Outside of karate Niamh enjoys playing football, netball and drawing
Favourite Kata:- Kushanku